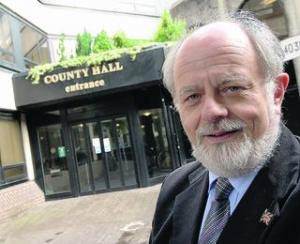 The fight is on for Oxfordshire to be recognised by central government as a stand-alone, single, viable economic area rather than part of a larger development region — according to the leader of the county council, Keith Mitchell.

A joint letter sent to council and business leaders from business secretary Vince Cable and communities secretary Eric Pickles has invited them to form new Local Enterprise Partnerships (LEPs) to replace Regional Development Agencies such as the South East Economic Development Agency (Seeda) — which is set to be abolished.

The thinking is that LEPs should represent identifiable “natural economic areas” — which would typically be larger than single counties — but Mr Mitchell is intending to ‘pitch’ Oxfordshire as an exceptional entity which should be allowed its own unique organisation to monitor the transfer of economic power from the public to private sector in the coming years.

He told The Oxford Times: “A fortnight ago, we called a meeting of representatives from 100 of the county’s top companies and we decided to put in a bid before the end of August for Oxfordshire to have its own Local Enterprise Partnership.

“We felt we could show that Oxfordshire is an identifiable, economically functional area in its own right “We have the best university in Europe here, and a top modern university too — and we have the backing of both vice-chancellors.

“We also have more publishers here than in London and a strong science base, including Harwell, the strength of which we have not promoted enough in the past.”

Deputy prime minister Nick Clegg last month announced a £1bn Regional Growth Fund to help areas and regions particularly at risk from public spending cuts, but Mr Mitchell said he expected most of that money to go to areas in the north of England.

As a result, he reckons the county council would probably have to pick up the bill for the new LEP and he would not expect the private companies involved to pay.

But he expected the annual bill to be comparatively small, perhaps £150,000.

Legislation to set up LEPs will be included in the Devolution and Localism Bill, scheduled to be introduced to Parliament in the autumn.

Meanwhile, it is expected that at least half the members of the boards will be composed of local business, with the other half coming from local authorities.

The partnership boards will be chaired by a prominent local business person from the private sector.

Mr Mitchell said Seeda had never seemed very real to Oxfordshire. He said it seemed more relevant to “Kent, not us.”

But what real power will the new partnerships have, and how will they differ from the old regional development boards?

David Doughty, Chief Executive of the present Oxfordshire Economic Partnership (OEP) — funded at least until October by Seeda and the county council — listed among their roles: rebalancing the economy towards the private sector; tackling issues such as planning and housing, local transport and infrastructure and small business priorities.

A stand-alone Oxfordshire LEP would restore to Oxfordshire people the ability to administer European Regional Development Funds, which are currently administered by Seeda.

Now a not-so-polite tussle has developed between Messrs Doughty and Mitchell over the future of the Oxfordshire Economic Partnership.

Mr Doughty said: “Creating an Oxfordshire Enterprise Partnership could be as simple as changing the word ‘economic’ in Oxfordshire Economic Partnership to ‘enterprise’, since OEP already has the governance structure, strategic economic agenda and engagement with local businesses that is required for a successful LEP.”

But Mr Mitchell said: “The OEP would not be suitable as the new partnership. It has failed to get the confidence and engagement of key employers in prosperous companies.”

Mr Doughty countered: “We have a database of more than 3,500 Oxfordshire businesses that we have engaged with in one form or another over the last two years — either they have come to one of our events or they have met us at one of the business events that we have attended or we have been in correspondence with them over a business issue.”

He added that in any case employers’ organisations were coming out against the idea of a stand-alone Oxfordshire LEP.

“Mr Mitchell has spoken to leaders of large companies such as BMW, but the opinions of the 35,000 smaller businesses in the county are also important. I think it unlikely the Government would allow Oxfordshire to form an LEP on its own.”

He added that the OEP would continue to exist as long as its members wanted it to do so.

Margaret Coles, chairman of the Oxfordshire Federation of Small Businesses, said: “We will meet up with other business groups next week to discuss this further.”

Meanwhile, Mr Mitchell is hoping that the fact that Prime Minister David Cameron was a local MP could be helpful.

He said: “It’s cheeky perhaps, but we have the ears of Government here, helping us to punch above our weight.

“We think it is worthwhile putting together a bid and that is what we are doing.”

This site uses Akismet to reduce spam. Learn how your comment data is processed.